"Reality often transcends fiction. And yet, people need stories of heroism and romance to endure the truth." -William 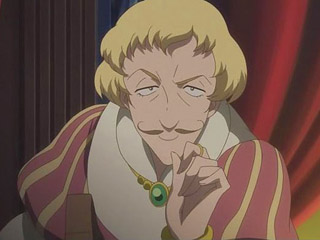 William de Farnase, also nicknamed Willy, is the play writer in the story.

He owns the theater where that the Capulet use as base, and in which Juliet was brought up as Odin

William (ウィリアム, Wiriamu?) Voiced by: Kazuhiko Inoue (Japanese), J. Michael Tatum (English)
A flamboyant playwright whose works have not been well-received by audiences. He's nicknamed "Willy" by his actors and stagehands. He allows Juliet and her entourage to use his theater for shelter. He knows that Juliet is deeply and painfully in love, calling her "the maiden who gave up on love", and wants to make a tragedy where both lovers die. The character itself is a caricature of William Shakespeare, and there are several allusions to the work of his namesake in his own plays.

Willy always thinks dramatically. He is very artistic but people don't appreciate his talent yet. Should any incident occur he shall turn it into a play.

Retrieved from "https://romeoxjuliet.fandom.com/wiki/William?oldid=4623"
Community content is available under CC-BY-SA unless otherwise noted.