Hermione de Borromeo ( ハーマイオニ・ボロメオ , Hāmaioni Boromeo ) is a character in Romeo x Juliet. She was engaged to be married to Romeo Candore De Montague by Lord Montague. Unlike Romeo, who wasn't interested in marrying at the time, Hermione was in love with him, took to the idea right away and Hermione gets along quite well with Romeo and Mercutio (Romeo's friend).

Hermione is a very sweet and kind woman, but she is extremely sheltered, frail and kinda dependent on Romeo Candore De Montague due to such things. As such, when it does seem she'll lose him, she becomes insecure and tries to bottle up her feelings: this causes her to briefly yet intensely explode when she meets Juliet Fiamatta Arst de Capulet, to the point of attacking her. However, Juliet manages to calm her down and explain the whole situation, in which Hermione eventually accepts and she realizes the fact that Romeo does not romantically love her where she wishes him well with Juliet.

Growing up sheltered in Nobility made Hermione completely oblivious to the dark situation in Neo Verona, and she knew next to nothing of how to do things for herself. At the very end of the series, she fondly thinks of the star-crossed lovers as she starts rebuilding her life alongside the recently saved Neo-Verona. In her own words: "Lord Romeo, are you happy, together with Juliet? I will also find happiness. I know I will, someday..." 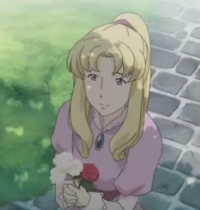 Add a photo to this gallery
Retrieved from "https://romeoxjuliet.fandom.com/wiki/Hermione_de_Borromeo?oldid=5018"
Community content is available under CC-BY-SA unless otherwise noted.