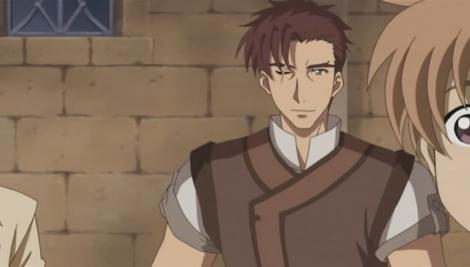 Curio ( キュリオ , Kyurio ) is Francisco's counterpart. His entire family was killed by the Montagues, and he has sworn to have his revenge on them. Curio is almost always the one who bails The Red Whirlwind out of sticky situations. He is the one who shows her the world and opens her eyes to the true seriousness of their situations; if Juliet wants the winds of change to blow, she will have to be less reckless in her actions.

Curio is a down-to-earth and serious man. He is a man of few words and decisive actions. Curio is dedicated to protecting Juliet with his life. Curio is also in love with Juliet, which Francisco often teases him about, despite being in love with her himself. (As seen in the series.)

Curio is described as a strong and medium height man. His most notable traits is his vertical scar on his left eye that he received after defending a young Juliet from a Montague supporter. He has brown short spiky hair and wears a white short sleeved shirt and a dark grey vest with brown and black borders secured with a black belt which contains his dagger on his back. He wears black and grey fingerless gloves secured by black belts, grey pants, and green boots. During the final battle, he wears spike shoulder armour and carries an axe.

Retrieved from "https://romeoxjuliet.fandom.com/wiki/Curio?oldid=4914"
Community content is available under CC-BY-SA unless otherwise noted.