Cordelia ( コーデリア , Kōderia ) is the faithful servant of the Capulets and the sister of Francisco. Even after they have been wiped out, she still helps Juliet Fiamatta Arst de Capulet, which can be dangerous when the Red Whirlwind is involved.

Cordelia is a kind and motherly woman who sees Juliet Fiamatta Arst de Capulet as her younger sister. Cordelia acts as a support for Juliet, being sympathetic and caring when it seems no-one else is. She is anxious for Juliet as the girl's feelings for her enemy grows, knowing that nothing good will come of their relationship.

Cordelia first appears in the first episode, where Juliet Fiamatta Arst de Capulet, on the run from Cabinieri guards, drags her into a street chase. As the bridge they run over collapses, Romeo Candore De Montague and Benvolio de Fresco Baldi on their Dragon Steed come to their rescue. After the incident, Juliet begins to ask about love, and Cordelia is surprised at this: "Juliet has lived as a boy all her life; why would she start to love all of a sudden?" And when she comes to know that the one whom Juliet loves is a noble, she persuades her to forget him.

Later, while Benvolio is residing at the Capulet's House she trains him for all the works like cooking, laundry, etc. Just before Juliet starts the invasion and with the help of William, Cordelia gets married to Benvolio (which now makes her Cordelia Fresco Baldi) and they have a baby together. 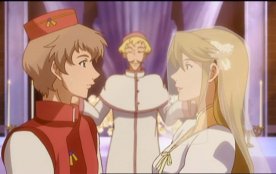 Cordelia's role is cut down short in the manga, but she still plays an important role like the others.

Retrieved from "https://romeoxjuliet.fandom.com/wiki/Cordelia?oldid=4848"
Community content is available under CC-BY-SA unless otherwise noted.