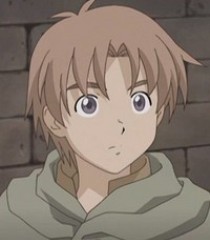 Antonio ( アントニオ , Antonio ) is the grandson of the rebel leader, Conrad. He has dedicated himself to helping Odin in his fight for justice, but is one of the few rebels that doesn't know of Juliet's true identity.

Of course, he is surprised to find out Juliet's true identity (and gender), but after getting over the shock, he continues to help her out.

Antonio appears in the first episode, helping "Odin" free an innocent girl from Cabinieri guards. He falls from a broken bridge, and is saved by Romeo and Benvolio.

Antonio is a brave, smart, funny and protecting little boy who is a great help for the Red Whirlwind and Juliet. He loves to help people almost as he loves adventure, and helping the Red Whirlwind definately gives him a good share of both.

It is also hinted that Antonio has a crush on Regan, as he often blushes around her.
Retrieved from "https://romeoxjuliet.fandom.com/wiki/Antonio?oldid=4922"
Community content is available under CC-BY-SA unless otherwise noted.